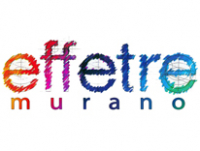 Since the Middle Ages and especially in the XV century the high technological level of the Murano glass makers appeared both on the refined creations of the master craftsmen and in the rare clear and coloured glass wisely made by the technicians of the Island.

In the second half of the XV century people creating glass compositions were highly skilful: they could produce glass rods made up of layers of different colours, showing the characteristic concentric stars pattern, once known as rosette and nowadays called millefiori or murrine.
The glass rods and millefiori production continued for centuries in Murano up today.

The processing techniques currently used at EFFETRE MURANO SRL go back to the XIX century, when Vincenzo Moretti rediscovered the difficult method of the murrine from the Romanesque ages, and created a multitude of coloured glasses and enamels, that’s why Effetre products are known also as Moretti. The tradition of these techniques, that still can be found in the Murano artefacts, is handed down from generation to generation. The modern technology together with knowledge of the ancient skills, allowed the success of coloured glass rods and millefiori on an industrial scale, though preserving hand-crafted accuracy and product quality.

Several items can be made using glass rods, such as beads, lamp-worked objects, jewellery and similar products, but also much bigger objects, such as vases, plates and artistic glasses.

As time goes by, thanks to the experience gained by the company, new product lines have been created, such as filigree, glass sheets, frits, blocks and tubes, and last but not least the gorgeous zanfirico reticello.

The strong point of effetre murano srl, the sole glass manufacturer in Murano Island, is the wide range of colours for its various items. This feature makes the company to be well-known worldwide.

All fields are required.